The Mystery of Buildings in the Eleventh Century

The Handfasted Wife is my historical fiction in progress. It is about Edith Swanneck, the handfasted wife of Harold Godwin. In this novel locations include late Anglo-Saxon estates, abbeys and palaces such as the Cathedral and Palace at Westminster depicted in an illustration from the Bayeux Tapestry.


Not much is known on the historical record about Edith Swanneck. I speculate in my fiction that, after Harold set her aside in February 1066, in favour of a political alliance and marriage, he granted her one of the neglected family estates. I chose Reredfelle as it was a Godwin estate recorded in The Domesday Book and was situated on the Sussex-Kent border not too far from Hastings and half way to Winchester from Canterbury (where she is recorded as owning two town houses). As a consequence, Anglo-Saxon estates and all other buildings in my novel have been the subject of extensive research. I have discovered that the subject of building in this period is shrouded with difficulty.
The Late Anglo Saxon Manor

Many of the buildings from the early medieval period were built in wood and either have vanished leaving only post-hole evidence or they have been rebuilt during the succeeding centuries. Generally the Anglo-Saxons built with wood, although by the tenth century, as with the Anglo-Saxon church depicted below, they were building churches in stone. 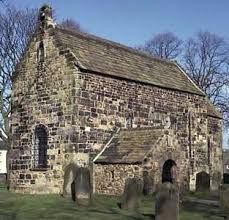 According to Della Hooke, in the north, farmsteads and settlements probably contained stone buildings. By the eleventh century, in the south there was an established system of large open fields belonging to the manor that were farmed by slaves and villagers. The Anglo-Saxon manor at Cogges in Oxfordshire had a charter where twenty to fifty hides were set aside to be worked as outland with villages placed amongst them. A high status hall and compound would have been substantial. Small huts may have existed within the compound to be used as workshops, stores, sheds, byres, chicken runs and cookhouses. Local markets and trade expanded also during the peaceful years of the mid-eleventh century.
The Eleventh Century Hall


During the eleventh century, high status building had changed from the simple wooden hall with a cluster of associated buildings into more sophisticated two-storied buildings with an assortment of separate kitchens and work buildings for storage and animals clustered around the hall. Mid-eleventh century halls were becoming manor houses and the area around them, as I suggest at Reredfelle, developed into the manor. Further afield the manor continued with a few small villages and hamlets attached to it. Excavated halls vary. Yavering in Northumberland is an early hall dating from the eighth century and consisted of a group of large halls lying on a single axis with smaller halls nearby. These halls were thirty-six feet by eighty-one feet and fourteen feet high with entrances to the centre of the long walls. End chambers formed part of the internal living space. There is also evidence that halls were plastered white inside. The hearth was placed in the centre and the porches had inner and outer doors. Often the hall had a steep roof and a wooden floor. The Anglo-Saxon Chronicle for 978 A.D. speaks of the collapse of a first floor in a hall at Calne, depositing a king and councillors on the ground beneath. The photograph below shows a reconstructed one storied hall from the eleventh century. 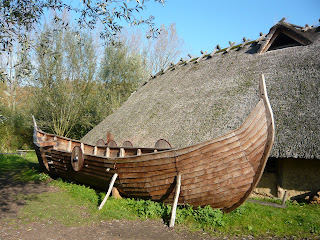 An upper storey could exist half way along the hall with a wooden staircase allowing access. The second storey space could be used as one room and could even be used as a minstrels' gallery or it could be divided up. Underneath the upper storey, as at Cheddar, there were room divisions. I suggest that aristocratic buildings may have had an upper window with horn coverings, shutters of woven basketry and on occasion, just possibly, glass. High status buildings may have had tiled roofs as depicted below. In Winchester, small triangular wooden shingles have been found that are associated with the roofs of secular buildings. The illustration from The Bayeux Tapestry below shows that Harold's hall at Bosham had a second storey and an outside stairway. 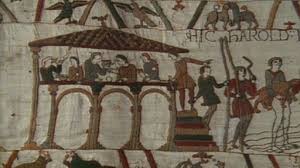 Often the exteriors were plastered, whitewashed and even painted in colour. Vine scroll ornament was used and dragons, too, were a favoured form of decoration. The poem Beowulf suggests that shields and tapestries were used as decorations in halls. Elaborate sundials on their own stone plinths were not uncommon in the garden areas of high status buildings.

Some buildings had cellars and airspaces designed to overcome dampness problems under wooden floors and occasionally the wooden floors were suspended.


Della Hooke suggests that at this time the settlement pattern was made up of isolated farmsteads and hamlets of labourers' cottages at crossroads or along patches of uncultivated land. Groups of people worked together communally with shared interests as diverse as mineral working, fishing or farming. Evidence of deliberate planning, according to Della Hooke, began as early as the seventh century. However, although charters exist from the tenth and eleventh centuries showing that the division of resources existed between peasants on a manor, nucleation became more general with the development of castle building after The Norman Conquest. 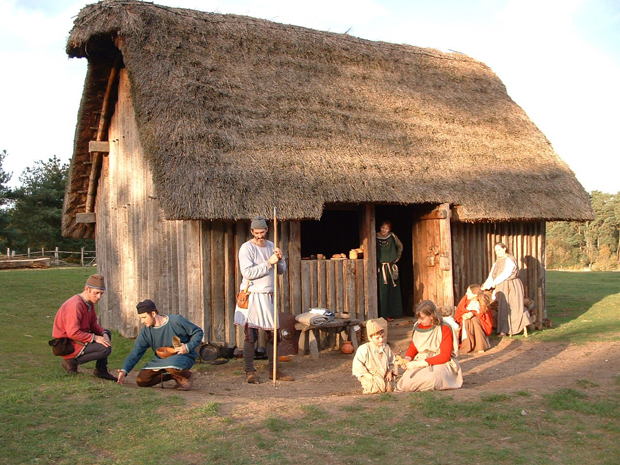 A Few Books on the Subject

Two weekends ago, Amsterdam, a most sophisticated European city, halted as snow fell and the canals froze over. On Friday all was hushed, traffic crept along the canal sides and bicycles were parked up, along bridges, by curbs, marooned. 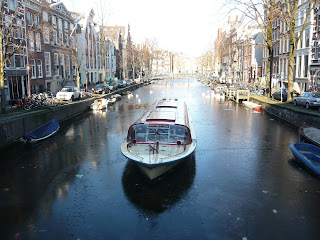 We picked our way along slippery cobbles, over treacherous bridges and through narrow icy streets to warm museums, steamy cafes, or to eat in an almost empty restaurant close to our hotel where we watched comings and goings, to and froings, to a comedy club opposite. 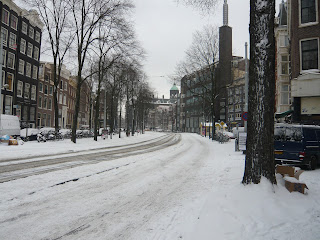 There was no evidence of gritting the roads that day. In fact, there was a marked absense of snow ploughs. It meant that the city retained a pristine beauty that felt like we had slipped back in time. Tall houses built during the seventeenth century during Europe's mini ice age and Amsterdam's Golden Age have never looked more enchanting. 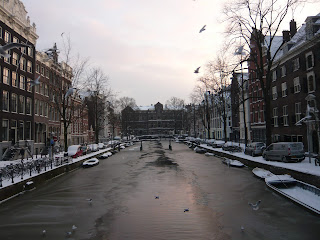 The Golden Age in Holland is still present on the network of city canals that expanded during the sixteenth to eighteenth centuries. Gabled houses, so tall and narrow that each posesses outside hoists to lift furniture up and in through the windows, belonged to Amsterdam's wealthy Burghers. Many a merchant realised fabulous fortunes in shipping and trade. Amsterdam's history is preserved in the Historical Museum and in a museum dedicated to the adventures of the V.O.C., (the East India Company). Amsterdam began as a small medieval town during the twelfth century, simple medieval homes built up on piles in the marshland that bordered the Amstel river. When the river was dammed at the river mouth to create a harbour the town got its name and trade boomed. 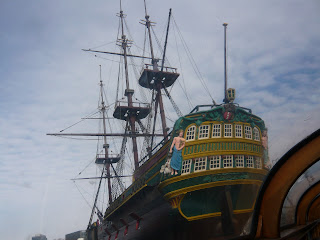 On a harbour tour we caught a glimpse of a replica of a V.O.C. ship, and, later, as our boat ploughed through ice and into the city's canals the noise of ice breaking was deafening. In contrast, unpreturbed, ducks and swans glided gracefully and effortlessly around miniature ice flows. By the end of the weekend the canals had iced over. The adventurous were skating or participating in games of ice hockey. I imagined how colourful and exciting the frost fairs that were held on rivers and canals throughout Europe during the seventeenth century must have been. 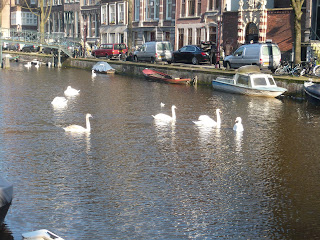 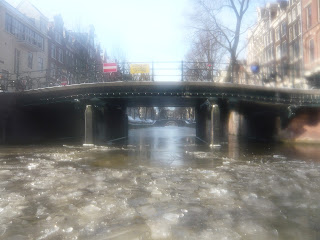 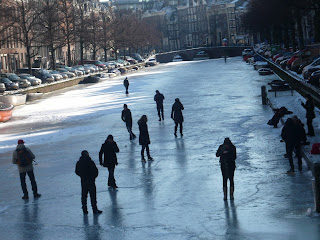 At night street lights glimmered on the ice and snow hung amongst pollarded trees and covered statues on squares with a glistening coat. We passed a pleasant evening in Boom Chicago where the  nightly stand up satirical comedy shows are in English. 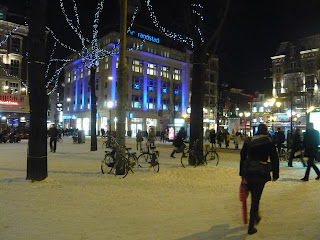 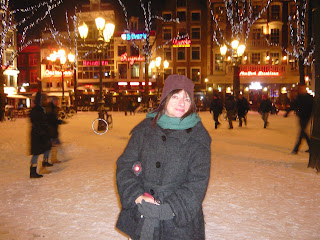 During the day we visited art galleries and museums. Of particular note is the Church in the Attic, a Catholic church that was established in secret in a tall house during the seventeenth century after Holland had embraced Protestantism. The house is now undergoing restoration and is, itself, a museum. One of my favourite places in the city is the Begijnhof (founded in the twelfth century) which was home to a medieval religious community of unmaried women, though not an order of nuns, who looked after the sick. It is still and hushed and it is one of the oldest courts in the city of Amsterdam, atmospheric and secluded, especially so in quiet, wintery weather. 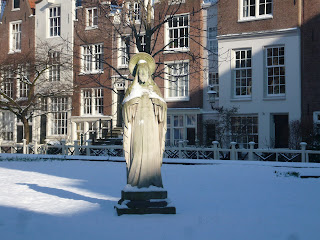 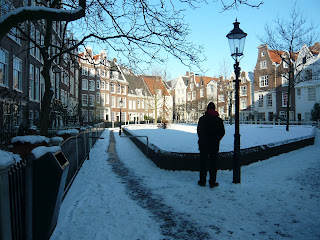 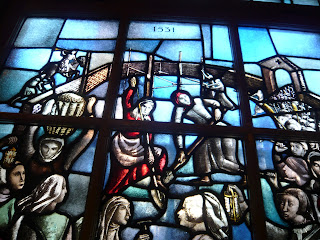 
This February the five villages skating race may happen. It takes place in Northern Holland but only when the canals freeze over and the last occurance was thirteen years ago. It reminds me of a magical long-ago journey. The first time I visited Holland was as a child, and before we set out on our great one month adventure from Belfast to Amsterdam in our black Morris Oxford car, my mother read us traditional Dutch stories including that of Hans Brinker and his skates and so numerous trips later I to this day remain utterly enchanted by this beautiful Northern European city, its buildings, museums, parks, snowy scenes and frozen canals. 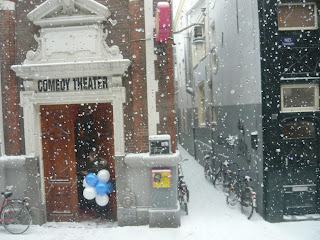