On a chilly November day last year I purchased a pair of Ecco walking boots and thick socks.  Walking from Ferrol to Santiago de Compostella would be demanding so I prepared. Each weekend I broke in those boots, walking locally. 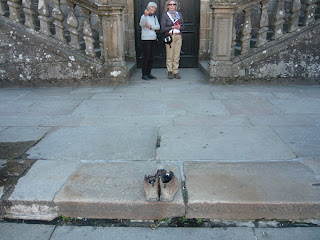 ﻿
At the end of May five of us flew from Heathrow by Vueling Airlines to A Coruna in Gallicia where we picked up my Italian friend, Anna.  My cousin, Anne, joined us from Northern Ireland and two friends came from Greece. At A Coruna airport we hired two small cars and drove to Ferrol where we had booked a hotel. Our plan was to move the cars along the English pilgrim route each morning, placing one at each end of the day's set walk. We had divided the walk into recommended sections. Although we had planned to stay in pilgrim hostels, which are not possible to book ahead, two of the hostels were closed. Undeterred, we stayed in hotels popular with pilgrims. Appropriate information about hotels, hostels and route maps can be collected in Ferrol at the Pilgrim office along with a pilgrim passport which can be stamped at each overnight stop. 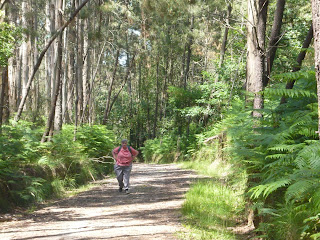 ﻿
The English Way from the coast is the perfect route for a novice pilgrim. We walked it without difficulty and only relied on the cars in the evenings. These 'donkeys' held our larger packs. We found parking them securely was surprisingly easy. One parking spot was in a farmer's yard!


Walking capes are an investment and wearing double socks essential. Only one change of outer clothing is advisable and something nicer to wear in Compostella. I admit it, I did purchase a pilgrim stick on the second day, great for the hills. It is my favourite 'souvenir' and has pride of place by my hallway door. We brought a first aid kit, suncream and mosquito repellent. Thankfully, we encountered no mini vampires at all. 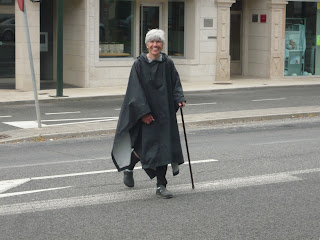 For the first three days the weather was fine but on the fourth a storm blew in.
We were alone on the route that week apart from a group of Italians, famous in my memory for their ability to find amazing siesta and picnic spots. We, too, took our time. It was not a race. A midday siesta or coffee and baguette in a small town were welcome punctuations along our route. 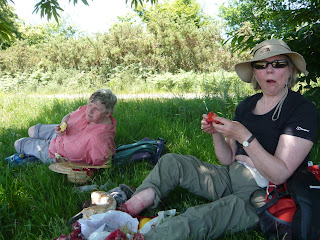 Day 1 We walked to  Pontedeume. 18km.  This section skirted an inlet. One of us, carried her binoculars as she is a bird watcher and pointed out Gallicia's feathered life to us when asked. This section is pleasant though urban. In Pontedeume we discovered an interesting eleventh century chapel overlooking the sea and in Pontedeume we ate delicious  tapas. The tapas bar features below. 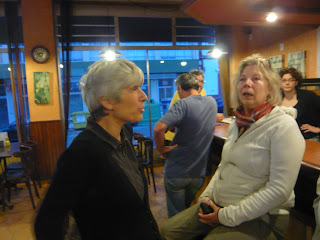 Day 2 Pontedeume to Betanzos. 20km. We were in countryside scattered with ancient barns and many corn fields. We set off through leafy woods, along moss lanes with high banks, paused in old stone churches and passed through ancient villages. Eventually we found the pilgrim hostel (not in Betanzos but a neighbouring town) and settled in. It was spotless and well equipped.  Pilgrim passports stamped, we headed for a wide sandy beach. There, we dined on local fish and watched the sun set. 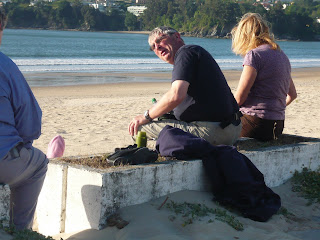 Day 3 Betanos to Bruma. 29 km. Betanos is a hill town with twisting streets, a central market and Churches that possess a solemn, onate beauty. After we had made market purchases of local cheese and bread, we followed the shell markers again and climbed two terrible and challenging hills out of the town. The sun was very hot.  Hats on and water, lots of it. There are fountains on the route and locals will kindly refill bottles. A highlight was a small  church, pictured below, which held a Sunday service in English. The other highlight was that the hostel we were heading for was closed. We were lost in the high country where no one spoke English. Undaunted, Anna used her pigeon Spanish and Italian to communicate our plight to local farmers who helped us to find a small hotel in a town some kilometres off. 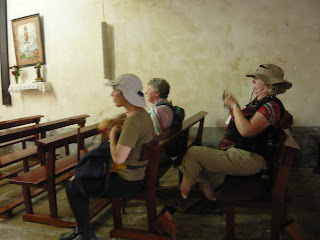 Day 4 From  Bruma  to Siguero. 24 km. A storm descended suddenly and with terrifying ferocity. We struggled on to Siguero.  Now that our chalice was in sight, we were getting very excited.  A seasoned pilgrim who joined us for dinner, regaled us with pilgrim stories, thus, in true Canterbury Tales fashion, preparing us for Santiago. The next morning we set out at 7 a.m. and walked the final 16 km. to the Cathedral in Santiago de Compostella. We were in time for  the 12 o'clock pilgrim mass which is incedibly moving, everyone hugging and laughing with the joy of arrival. 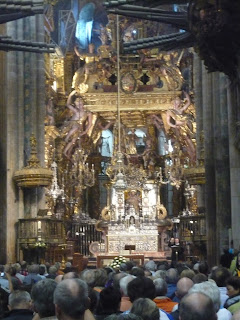 Day 5 In Santiago de Compostella. At the Pilgrim office, in the shadow of the Cathedral,  penetrating questions are asked. I held my breath, but we had done it! We had accomplished 80 miles. That is enough to achieve a certificate scribed in Latin to the effect. 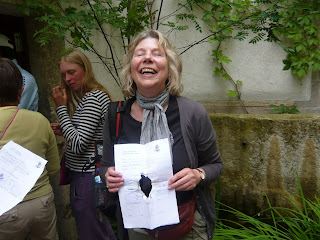 Day 6 The Hotel San Francisco, is an old convent with fabulous views, situated conveniently behind the Cathedral. Exploring Santiago is fascinating. I loved the Pilgrim museum and the beautiful though simple Cathedral, where it is impossible not to think of the thousands and thousands of pilgrims who have passed this way before. 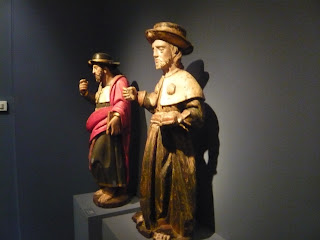 They say once you have done it you want to walk Compostella again. It is true. I felt that for me, on this walk,that although there was no earth-shattering self realisation, there was a wonderful sense of past and present intertwining. We were walking to enjoy it. No rush, no gallop to get there. The Compostella walk is a celebration of life. As for my feet; they luckily survived without one blister, so purchasing the right boots on that foggy November day last year and walking them in, paid off. 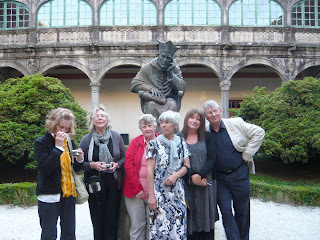