Embroidery was equated with luxury in medieval society and culture. It covered religious garments and enhanced secular garments indicating wealth and status. Whilst England was a great producer of wool, the highest status fabrics were silks and by the fourteenth century velvets. Opus Anglicanum means English work, and is used to describe embroidered textiles. The method was a technique of underside couching, attaching threads which might be gold or silver or silk to the support fabric from underneath, providing a texture which would catch the light, and give a sense of flow and texture.


Who were the embroiderers of these valued, exquisite works both religious and secular? They were both male and female. However, the medieval church had a misogamist attitude towards women.

The following words were written in The Decretum, the systematisation of church law set down in the twelfth century- 'Women's authority is nil; let her in all things be subject to the rule of men. And neither can she teach, nor be witness, nor give guarantee, nor sit in judgement.' 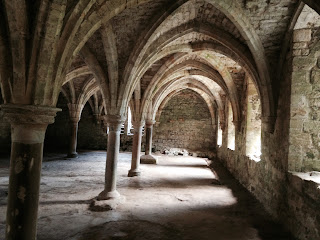 Men often owned the workshops but not exclusively, nor were they always the embroiderers of religious embroidery, nor did men necessarily design these embroideries.

Women were viewed in a dual manner by the church. During the twelfth and thirteenth centuries the cult of the virgin meant that women were revered as mothers. Often on a cope there would be an embroidery depicting The Coronation of the Virgin, placed high on the cope, lying on the upper part of the priest's back.

Key images placed below The Coronation of the Virgin  would incorporate scenes from the Bible and the saints from The Golden Legend. Women were also regarded as temptresses and as lesser beings than men. This originates in the notion that Eve was created out of Adam's rib and she was tempted by the serpent in the Garden of Eden and tempted Adam so that they were expelled from the garden.


Yet, women did run embroidery workshops as well as men and they were responsible for much of the Opus Anglicanum work during the twelfth, thirteenth and fourteenth centuries when its popularity was at a height and English embroidery both religious and secular was valued throughout Europe.

Female embroiderers who owned workshops or were apprenticed in workshops run by men cut across the notion that the majority of thirteenth and fourteenth religious embroidery work such as copes was worked in convents or monasteries, in Beguine societies or by noble ladies. Embroidery was produced in both secular workshops and in religious houses. 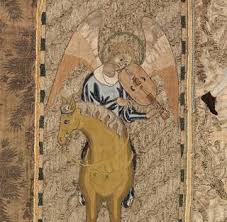 Medieval crafts were, in fact, open to women. There were women chandlers, iron makers, net makers, shoe makers smiths and goldsmiths. There were female embroiderers too. The existence of 'femmes soles' who worked independently is recorded. 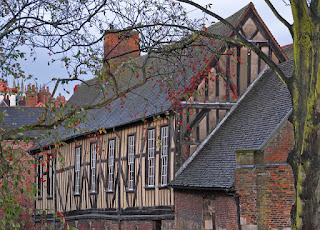 Guilds made provision for widows so that women could carry on the family business. The widow would have had to have taken part in the work for at least seven years before succeeding to her husband's business. Children were apprenticed, both sexes, and business women took on apprentices too.

Many embroidery workshops of the thirteenth century were situated around Old St Paul's. The centre of domestic and public life was the workshop. The sale of goods was transacted in the house. The household dwelling place incorporated the workshop. Workers included the whole family and were included within the family eg apprentices.

I am writing a new trilogy set in the thirteenth and fourteenth centuries and have been researching female embroiderers as one of my characters will be an embroiderer working for Ailenor of Provence, Henry III's queen.

Whilst researching, I discovered that a widow, named in relation to embroidery during King Henry III's reign was 'Joan, late the wife of John de Winburn who was paid for a cope of 'samite embroidered with the Jesse Tree which the king offered in St Peter's Church at Westminster at St Hillary's.' (the time of year/ saint's festival).

The Jesse Tree was a popular image, tracing the lineage of Christ as royal from The House of David.

Another thirteenth century embroiderer, Mabel of Bury, appears twenty four times in the Liberate Rolls of Henry III between 1239 and 1245. She was apparently a 'femme sole' and not employed by the king's merchant suppliers. She was paid £10 in 1239 for embroidering a chasuble and offertory veil. In 1241 pearls were purchased for her to use on the commissioned chasuble. She also had forty shillings to buy gold.

The king called in appraisers to assess her fees; London embroiderers to advise him as 'he did not want to offend in this matter or incur to some extent condemnation of himself.' Mabel embroidered a stole, a fanon, an amice, collar and cuffs. Her last work for Henry III was an embroidered standard for the altar at Westminster Abbey which was his life's building work.

The standard was to show the Virgin and St John. Mabel controlled the design. She then disappears from the historical record until 1256 when King Henry made a pilgrimage to Bury St Edmund and gave Mabel a gift because she had served the king and queen for so long creating ecclesiastical garments. She was given six measures of cloth of her choice and the fur of a rabbit for a robe. A furred robe was a traditional mark of great respect in this period. 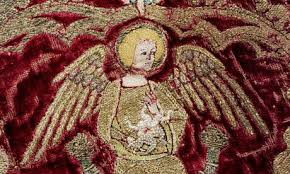 So with Opus work, there is a contradiction between the misogynist attitude of the medieval church and that of the actuality of women's independence in the thirteenth century. Men and women were employed in medieval workshops making art for the church as well as secular items and often, like Mabel, they were able to design the work too.

It is why if you look carefully at a cope from the era you can often see little every day life additions such as midwives attending the birth of Jesus, obviously attesting too to the virgin birth, or, for instance, a dog barking at the angel Gabriel who appears to the shepherds during the Nativity, or even animals peering from the leaves in the Tree of Jesse. The art of this period displayed a concern with nature and the every day life of craft workers.

Venice in Autumn- City of Dreams


If New York is the city that is so good that they named it twice then what does that make Venice?

La Serenissima, Queen of the Adriatic, City of Water, La Dominante, City of Masks, City of Bridges,The Floating City, City of Canals and Venezia. The multinominal champion of cities. Venice, the dream city, the city that if left unvisited will leave a lacuna in any traveller's cultural history.


The Centro Storico is home to less than 60,000 residents who host an annual influx of 20 million visitors. Venetians seem inured to the wonder around them. They seem content in the knowledge that their home is the citta per eccellenza and they consider the rest of the world as merely 'campo', an outland.

You will rarely meet a Venetian in Harry's Bar or Cafe Florian, except perhaps, during the deep night when the exhausted incomers have wearily decamped to their hotel beds. You will perhaps spot the Venetians if you venture to Teatro La Fenice for an opera or to Teatro Goldoni to see a play. In these cultural oases, in their Italian finery and jewellery, they gather to be seen as much as to see.


During our last visit the goddess Fortuna smiled on us and allowed us the pleasure of attending a performance of the Globe Theatre's production of The Merchant of Venice at the Goldoni. Tickets were a steal at around 22 Euros and with a long run under their belts the cast gave a flawless performance. Jonathan Pryce ( 'as seen in' Brazil, Tomorrow Never Dies, Evita, Glengarry Glen Ross and currently in BBC's Taboo, as the DVD blurbs burble, )  was particularly Shylockian playing opposite his real life daughter Phoebe as Jessica,the daughter of Shylock. Father and daughter and the Merchant IN Venice, a double whammy.


Apart from the Temples, Churches, Galleries, Museums and Architecture, Venice has myriad other pleasures. Getting lost in the labyrinthine alleys away from the signposted arteries to the Rialto and St Mark's, stumbling upon obscure piazzas, visiting the outer islands such as Torcello and San Michele the burial place of Ezra Pound, Stravinsky and Diaghilev, supping inexpensive Aperol Spritz while savouring a variety of gorgeous chichetti in a canalside bar, these just a few of the pleasures of Venice.


As John Ruskin wrote, 'And now come with me, for I have kept you too long from your gondola: come with me, on an autumnal morning to a low wharf or quay at the extremity of a canal, with long steps on each side down to the water, which latter we fancy for an instant has become black with stagnation; another glance undeceives us, -- it is covered with the black boats of Venice'. 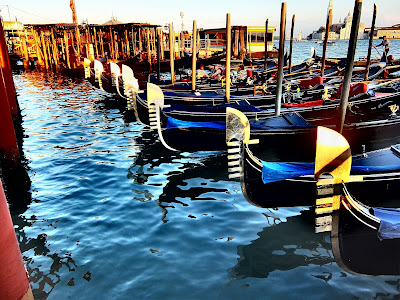 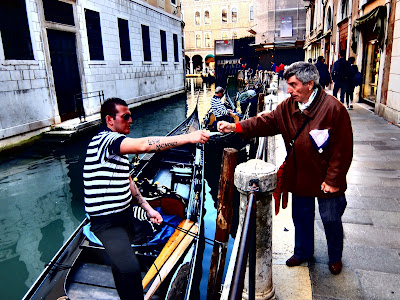 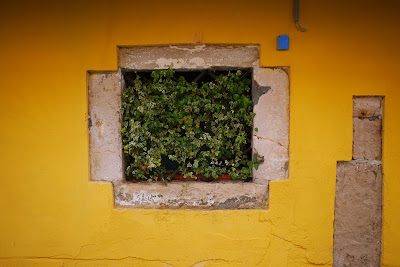 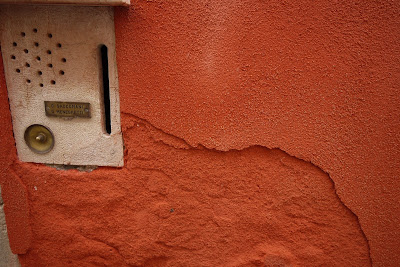