Falconry, Lepers and the Angel

The medieval festival in the small Tuscan hill town of Montevettolini takes place in September for one day only. Montevettolini nestles in the hills about a half hour's drive from Lucca and dominates the hinterland a few miles south of Montecatini Terme.

This annual medieval experience is a crowd drawing event; being a fortified hilltop town there is only one road in and one road out and both of these are hardly wide enough for an ox-drawn cart. Consequently on the day of the Festa visitors' cars straddle the olive tree lined verges for miles in both directions. One needs to arrive relatively early to avoid a strenuous uphill climb to the town gate.


We do find parking and after a short walk to the town walls we wait in a queue for the door in the great heavy gate to open and when it does the fierce gatekeepers clad in studded leather cuirasses and fully armed with sword and lance bark unintelligible questions at us in Italian. As visiting emissaries from a far-off foreign land we are closely scrutinised and eventually allowed passage. We drop a generous voluntary stipend in the basket by the gate to appease them and proceed to cross a temporal boundary.


Once inside our twenty-first century world disappears and we are in the thirteenth century  jostled by jesters, pilgrims, crusaders, lepers, owl keepers, bee keepers, falconers and town dignitaries and merchants. All of Montevettolini participates in this richly concocted illusion accompanied by convincing actors and musicians who wander the streets with medieval instruments playing music not unlike that of Galicia or Brittany.

The broad square adjacent to the town gate is flanked by medieval buildings. All modern signs have been concealed and evidence of our world is banished for the evening. In the main square there is a fascinating programme. As dusk descends we watch a falconry event as pigeons flee to safety in the tall church belfries when the hunting birds soar high. An Angel and one of his Apostles stalk the square accosting us innocents. Later as darkness falls town dignitaries gather for a grand candle-lit procession lead by an important crusading nobleman.

Small events occur in open spaces by churches. The musicians play and a maiden waits to be ducked in a pond if only someone can toss a small ball into the bulls eye net. The narrow streets are full of stalls containing beautiful crafts, wine, breads , mushrooms, foods, costumes, posies, circlets of flowers, hats and demonstrations of candle making, carving and stone masonry. We turn into a street by the walls and are suddenly accosted by moans, wails, groans and begging from a colony of lepers who desperately grab our legs. Around another corner we encounter a collection of owls.

As the sun sets over distant hills in an enormous fireball we eat in the common hall. Our fare is basic but a substantial, even, some might claim, luxurious plate of beef and beans accompanied by a generous flagon of red wine. 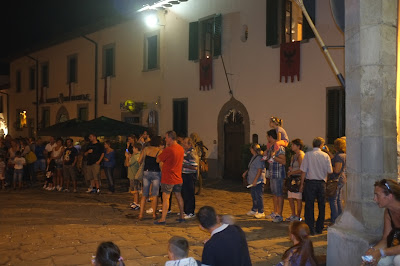 When we finally exit the gate at midnight there is still a queue gathering to beg entry. Patiently the gate keepers ask their questions and allow them through when they make satisfactory responses.
We make our way back to Lucca wondering if Medieval life could really have been that much fun....

The Bayeux Tapestry and various manuscripts provide the writer of historical fiction with an insight into early medieval costume. For example the lavish wealth of this world is evident in Aelfric's Colloquy where a merchant sold purple silk and precious gems, coloured garments and dyes. Anglo-Saxon wills are another source of information as they reveal bequests of clothing.

Anglo-Saxon glosses often provide garment names that are fascinating. It is interesting to guess which are male, female or both or even what they are. Here are a few of my favourites:

A Gobweb- something made of precious cloth, frequently purple, usually silk, maybe shot silk or taffeta.
But what is a Gobweb? No one knows but if you have a suggestion perhaps you would share your knowledge.

Breast-lin -  a linen band for the breast, perhaps a garment, maybe something else, or could it be a wrap for a corpse?

A Breast-rocc- a garment covering the chest. Is it linen underwear?

Slop- an upper garment that is loose and made of linen.

Nihtwarn- nightwear worn by men, but what about women?

At night a lady might hang her long-sleeved gown on a clothing pole. She would set aside her headdress, one designed to conceal the neckline. Circa 1066 her gown was tailored but she also had a sleeveless overgown which hung loose from her shoulders. Wide sleeves were in fashion and these flared into exaggerated points. The overgown was often brightly coloured and ankle length with a pronounced hem and sometimes this possessed a contrasting border. In a picture supposed to represent Judith of Flanders her tight belt is visible at the front of the gown to cinche the fabric and show off the waist.

Sleeves belonging to an underdress visible at the wrist were of linen material. Occasionally the fabric was drawn together with needle and thread, soaked and stretched thus creating pleats. They were not permanent and could wash out!

Stripes of cloth wound around the legs from mid calf to the ankle can be seen in early medieval pictures of women on horseback.

It is thought that young girls wore their hair long and loose over their shoulders but a band might keep it neat. Women covered their heads indoors and out. Head bands were worn with a cloth headdress to conceal both neck and shoulders. The Fillet, often mentioned in The Handfasted Wife, was considered a characteristic feature of the married woman's appearance. It was worn in conjunction with a headdress of fabric. Streamers ending in decorated tags emerge from the veil or hood at the back. The Fillet was a narrow piece of fabric embroidered, brocaded, possibly jewelled or it could be a circlet of silver worn outside a hood. It is thought that in the late eleventh century women wore their hair up. A plait or firm mound of hair was practical since it was all the easier for pinning a wimple, veil or hood onto it.

Elditha, the heroine of The Handfasted Wife, placed her shoes up on the rafters. She had ankle shoes that were flat-soled. They were plain with a strip running down the front of the foot. The toes have modest points. She had several pairs of low shoes or slippers and at least one pair of fine deerskin boots.

Anglo-Saxon textiles dazzled the Normans who often referred to them in writings. Their fabrics included imported silks often patterned, fabrics embroidered with gold, fabrics adorned with pearls and jewels and fur-trimmed robes. Matilda, the Conqueror's queen is known to have used English embroiderers. The world the Normans conquered was rich in art, literature, fabrics and jewels. Its noblemen and women were dressed extravagantly. So when Gytha, Harold's mother went into exile with a great treasure in 1068 she may well have carried with her many beautiful and valuable garments.