Mystras is just over the Taygetos mountain from my summertime home near Kardamyli. It is situated only 6 km from Sparti. It is a pleasure to introduce this medieval city to friends and visiting writers. This fabulous Byzantine city covers a hillside. At the summit my visitors discovered the ruins of a Frankish castle, once the stronghold of William II of Villehardouin, a medieval Frankish prince.

William II was the ruler of the Frankish Principate of Achaia. Here he founded his principality in Greek Byzantium after the fall of Constantinople in 1204. After the fall of Monemvasia in 1248 this knightly foreign prince lost no time extending his power deep into ancient Laconia,  successfully establishing his dominion over the whole Peleponnese. The Chronicle of Morea states:

'he found a curious hill, an outcrop of the mountain ...and he gave orders and upon the hill they built a castle/ and they called it Myzethra, because thus the people cried out its name:/ a splendid castle he made it and a mighty stronghold.' (lines 2985-2991)

Sadly the Franks were defeated at The Battle of Pelagonia in 1259 and William was taken prisoner. To buy his way out of a Turkish prison he ceded the castles of Monemvasia, Mani and Mystras to the Turks. It was unfortunate for him that, by the time he purchased his freedom, the Franks had already retaken all of his fortresses! Consequently for the following decades there were struggles between the two groups of people, Franks and Turks. The Turks put their own governor in charge of the city. None the less, the Franks kept regaining their territory until by the mid fourteenth century emperor John VI Cantacuzenus took stronger measures and sent his second son Manuel to the Peloponnese with the title and authority of Despot. As a consequence, a brilliant period of Byzantine renaissance followed in Mystras.


﻿
During Mystras's Frankish rule, a town grew up around the castle because many inhabitants of the surrounding area came to the fortress for protection. In 1265 the Cathedral of Ayios Demetrius was built. By 1290 there were the Monastery of Brontochion and the church of Ayioi Theodori and that of Aphentiko just outside the town wall. The walled town itself contained a magnificent Palace and the dwellings of officials, magistrates and burghers.

Exploring the ancient city takes easily three hours and every time I visit I take different routes around Mystras and always discover new things. The art in the many churches alone, the frescos and the fabric of these churches and the monastery provide a visual voyage. If you were to visit this site, bring a few snacks and a water bottle and during midsummer do set out very early. Midday in summer is exacting for the most intrepid traveller. Wear sensible shoes and a sun hat is indispensable. You will climb, explore and lose yourself here.

During the last centuries of the Byzantine empire, Mystras saw restoration and external threats, internal upheaval. Yet it remained important, the haunt of artistic and intellectual eminence. Mystras also became the centre of military campaigns and diplomatic intrigue as the Franks of Arcadia lost control. After the Turks finally controlled the region, Mystras had direct links with Constantinople. This was to the city's advantage since it became a centre for philosophers, historians, painters, bibliographers who brought a high level of sophistication to the area. It became a city in which indigenous Greeks, Franks, Despots who intermarried with prominent European Houses, dwelled together in relative harmony.


﻿
By the fifteenth century the Venetians attempted to capture the city but initially failed. They brought silk production and with that prosperity to a town of around 40,000 inhabitants. Mystras was finally taken by the Venetians in 1687 who held it for decades until the Turks recaptured it during the second decade of the eighteenth century. Following its recapture Mystras had a chequered history until the new town of Sparta was established during the nineteenth century and the medieval city was finally abandoned.

Mystras was a solitary, elegant city with a fabulous history. Looking over the plains from the Castle at the top I can imagine the thirteenth century, my favourite era, that of the Franks. It is so easy to think about the Crusades that brought Western kingdoms east, of Frankish knights, the hammer of their workshops, their monks and nuns and the vibrant life of an emerging medieval city. This is a very romantic image but as a writer of historical fiction, perhaps one can, perchance, dream. If you get the opportunity do visit Mystras. It is one of the fascinating sites in the Peloponnese.

Carol McGrath is the author of The Handfasted Wife, the story of Edith Swan-Neck, King Harold's Handfasted Wife published by Accent Press and first novel in a trilogy entitled The Daughters of Hastings. 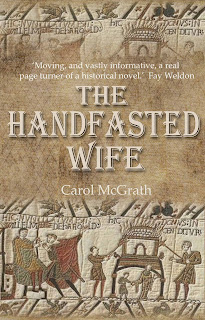 The Handfasted Wife is the story of King Harold's wife Edith Swan-Neck. As 14th October is the anniversary of The Battle of Hastings here is an extract from the novel. 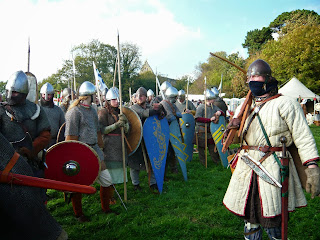 The soldiers escorted Elditha to the battlefield shortly after Matins. They brought her to where Duke William had remained all night in his bivouac encampment, to where she could see Harold’s captured standards flying alongside the Duke’s own by the entrance to his tent.  Desperately looking around she saw a horrific sight. Everywhere bodies were already stripped of mail, hauberks and weapons. Even boots and hose had been taken from them. The Duke’s soldiers had been at their grisly plunder during the night.  Torches burned over it, lighting up the grim sight. She sat on her horse, her long neck erect and with Ursula by her side. They were accompanied by the two monks who had come with the King from Waltham. They had said that they could not identify the King’s fallen body, only his head. The rest was mutilated, in pieces. They told the Norman leader that Elditha Swanneck would be able to recognise her husband and reunite the King’s severed head with his body. So here she was, unceremoniously lifted onto a horse, escorted from the camp and marched north to the boundary of Harold’s estate of Crowhurst that was marked by a grey apple tree, and into the meadows of death that lay around the ridge. 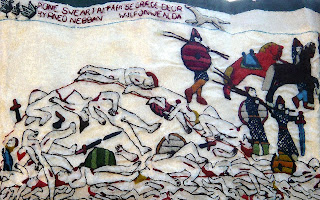 Her very sense of herself was frozen. She searched for him through the piles of the dead, pointing for this body or this limb to be turned over. Her fine boots were slippery with blood and she had to clutch her veil close against the metallic smell of it; not only that, but also the stench of shit and spilt guts. Duke William, his brothers Bishop Odo and Robert of Mortain, and a group of knights were watching her as she moved amongst the copses of departed Danish house-ceorls and Saxon aristocrats. A great gathering of priests was permitted to take away the corpses of fallen noblemen for burial. Another quarter hour passed and still she had not found Harold.


‘You have done what you can, Lady,’ said William Mallet, half a Norman and half English-man, a knight who had lived at Edward’s court. She had known him then. ‘Would you rest?’ he added.


‘This place will too soon become a Golgotha of skeletons, a vast field of bones,’ she cried out. ‘What evil have you done here? You will rot in hell for this, Mallet. I shall find my husband.’


He turned away from her. She refused to be consoled or stop searching, but frantically carried on asking for bodies to be lifted, peering closely at any torso that resembled her husband’s. It was as she made a second tour of the dead up on the ridge, that she found him. She identified his long body by marks on his shoulder.  There were battle scars, too, which she now recognised on his torso and bracelet tattoos on his other arm. When she found his severed leg close by she could see the swan’s feather and the blood-stained, green-eyed dragon that encircled it and by these marks, she knew the limb was his. It was then that she sank into the mire and wept for her loss.


‘May my lord’s soul rest in peace.’ She took a cloth from her belt and carefully wiped away the blood from around the marks. 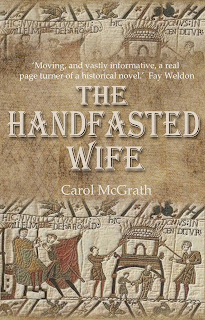 Read on...The Handfasted Wife is published by Accent Press and can be bought from Amazon Books or ordered from bookstores everywhere.
Posted by Carol McGrath at 13:11 2 comments: